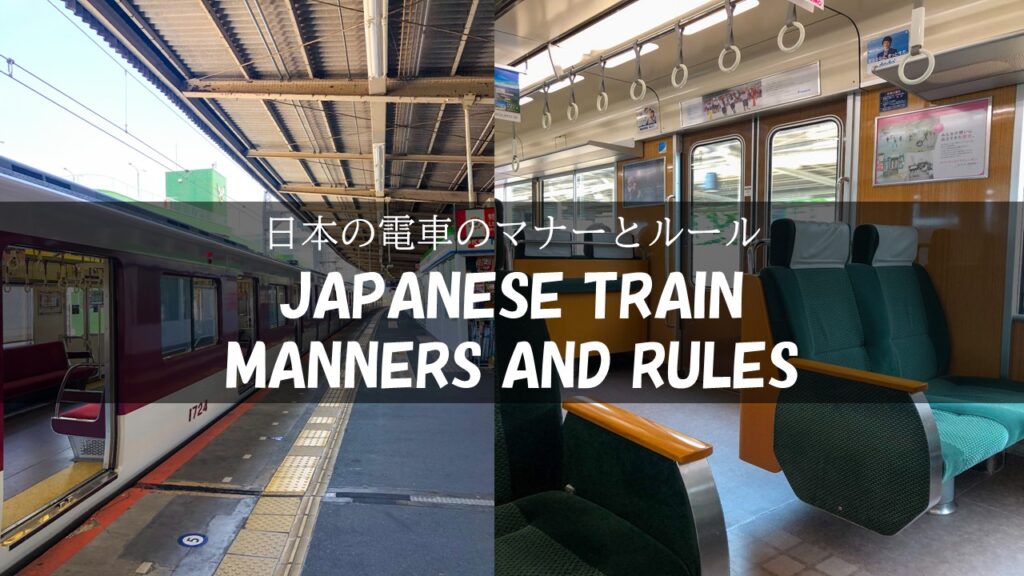 Japanese Train Manners: What Japanese People Want You To Know

If you have visited Japan, you have probably noticed how clean, organized, and peaceful Japanese trains are. There are some rules and manners related to Japanese trains that might not exist in your country. You should learn about Japanese train manners before you visit Japan to avoid behaving unintentionally disrespectful to locals.

This article will guide you through the basic rules you should follow when using the train in Japan. I also interviewed some Japanese people and found out some unspoken train rules and manners that they follow. Find out more below!

1. Stand In Line While Waiting For The Train 🐥

While waiting for the train, you will realize that there is a line formed, and therefore you should stand at the end of it and never ever cut in line. If you’re the first in line, make sure to stand behind the yellow line where you won’t risk falling off the tracks or stand in the way when people get out of the train.

There is usually a mark that guides you where to stand.

2. Wait For All Of The People To Get Out Of The Train Before You Go In 🚶‍♀️

When the train arrives and the door opens, wait until all of the people have stepped out of the train. You probably want to get in as fast as possible and get a seat, but this is considered bad manners.

After all the people has stepped out of the train, you can then go inside. Once again, make sure you don’t stand in the way of the people coming out.

3. Refrain From Sitting On The Priority Seats ♿

The priority seats in Japan are taken quite seriously so you should not sit on these seats. You will usually see a sign that says “Priority Seat” or 優先席 (YUSENSEKI). Leave these seats open for people who need them such as pregnant women or elderly people.

4. Put Your Phone On Manner Mode & Don’t Talk On The Phone 📵

When you use the train in Japan, you will probably realize how quiet it is inside. In fact, in Japan in general, you probably won’t hear a lot of phone ringing or phone alert sounds. This is because Japanese people usually set their phones to manner mode because phone sounds could disturb other people. So don’t forget to set your phone to manner mode when you use the train!

It is also considered very rude to have conversations on the phone while on the train. This is because the noise you make while talking on the phone disturbs other people. If you get a call and it is not urgent, wait until you get off the train and then make the call.

5. Refrain From Making Noise While On The Train 🤫

You should make the least noise as possible while on the train. This includes talking with your friends, phone tapping sounds, or music sounds from your earphones. You should always be mindful of the people around you and do your best to not disturb anyone.

I asked some Japanese people about the unspoken manners and rules that they follow while using the train. I also asked them what they thought would be useful information for foreigners living or traveling in Japan.

Read through the points below carefully and make sure to put them into practice. You will be loved by locals!

🤚”Hold onto the handrails, don’t just stand without giving yourself any support because when you fall or tip over, it also becomes dangerous for other people.” (Man, 20s)

🦵”While seated, don’t swing your legs to the front or to the side because it gets in the way of other people who are trying to walk. It also becomes troublesome to the people next to you especially if you’re sitting in the box seat type.” (Woman, 30s)

🔵”Make sure you make space around the entrance of the train so that it is easy for the people who are getting off.” (Woman, 40s)

🥢”Don’t eat inside the train. (Except for Shinkansen Bullet Trains)” (Man, 40s)

🙋‍♂️”During rush hour when the train is cramped, make sure your hands are placed where it will not mistakenly touch other people to avoid being misunderstood as a pervert. (It is recommended to keep your hands somewhere high).” (Man, 20s)

🎒”Make sure your belongs aren’t bothering other people. Especially backpacks because it can sometimes strongly hit other people when the train wobbles.” (Woman, 40s)

🤐”Don’t talk on the train if not necessary. If you must talk, make the least noise possible as it will bother other people.” (Man, 20s)

⚡”Don’t walk on the yellow Braille blocks at the station. They’re made for blind people to use as guidance. Also, you risk falling on the train tracks so stay behind it.” (Woman, 20s)

📵”Don’t use your phone inside the train station because it is dangerous! A lot of people are walking!” (Woman, 20s)

🧳”Don’t put large luggage in places where it might block the passage ways. This includes the aisle and the entrance/exit door. People need to walk!” (Woman, 30s)

🚶‍♀️”Let the people inside the train get off first before you get on!” (Man, 40s)

↔️”This is a bit confusing, but depending on the region, you either stand on the right side or the left side of the escalator. (You need to be mindful of the open space for people who are in a hurry to walk up or down the escalator)” (Woman, 30s)

🎧”You can listen to music or watch videos freely, but use your earphones and turn the volume down! There are people on the train who wants to commute in peace!” (Woman, 40s)

♿”Leave the priority seats for the people who need it such as the elders, pregnant women etc. Also, give your seat to someone who might need it more than you do.” (Woman, 40s)

📢”Please don’t talk loudly when you’re on the train. Especially on the subway, some people sit on the opposite side of the subway seats facing each other and shout their conversations for the whole train to hear. It’s very unpleasant.” (Woman, 30s)

🧗”Escalators are not for playing or climbing.” (Woman, 30s)

🎒”Inside the train, you should bring your backpack to the front side of your body or taking it down and holding it with your hands so that it doesn’t bother other people.” (Woman, 30s)

⚡”There are a lot of unspoken and unwritten rules and manners in Japan so it is probably best to find a way to communicate these rules to foreigners so that they can understand.” (Woman, 30s)

📏”Wait in line while waiting to get on the train. Depending on the train you’re getting on, especially bullet trains, you might have to line up differently. Learning the difference of the 🔴 marks or the 🔺 marks will probably make your life better.” (Woman, 20s)

What do you think about these rules and manners? Are they quite hard or quite easy to follow? How much does it differ from the rules and manners in your country? Have you experienced any culture shock when using the trains in Japan?

Let us know in the comments!

4 thoughts on “Japanese Train Manners: What Japanese People Want You To Know”